The Unspoken ‘Oh’ of Finding Out a Baby Has Down Syndrome

It happened.  The unspoken “oh.” The reason I have been so open about my son Asher having Down syndrome even before he was born was so everyone would “know,” in hopes of lessening some of the awkward moments. I also try to share what I have learned about Down syndrome to hopefully educate others.

Recently I ran into someone I am not friends with on Facebook and whom I have not seen in a while. I was pushing Asher in his stroller, and this person looked at it inquisitively. I said, “Did you know we had another baby?” “No,” was his response. If he didn’t know we had a baby, then he didn’t know we had a son and that our son has Down syndrome. So I turned the stroller around and introduced him to my sweet Asher. Then there was the “oh.”

The “oh” can mean many things, and I can’t always interpret it. It can mean, “oh, he is so sweet.” Usually that “oh” is accompanied with oohs and ahhs and lots of baby talk. This is my favorite kind of “oh” because, after all, he is adorable. Sometimes the “oh” can mean pity, like “oh, I am sorry.” Most of the time it probably means “oh, I don’t know what to say.” I am not sure which “oh” this was, and I thought about saying something about him having Down syndrome, but then thought I shouldn’t have to “explain” my son. I instead said nothing at all. If I could do it over again, I would say something like this:

We found out Asher has Down syndrome before he was born. Initially we were shocked and upset. Now that he is here we are really doing OK. We are actually doing better than OK. He is a true blessing and brings joy to our lives. Sure, there are times where I wish things weren’t so hard for him. For example, he has to work for every milestone (like sitting and rolling over) while “typical” children do these things with ease.

I probably would have stopped there, but I could go on. Asher has shown me that sometimes difficulties can become blessings. I’ve always known this, theoretically, and James chapter 1 tells us this, but it is one of those things that is easy to say, but difficult to live.

When Asher was a few months old, he was diagnosed with hypothyroidism and was prescribed medication. Not a big deal. Except that he had to take the medicine by spoon. Remarkably, we managed to get him to take it from the spoon. He has also had some problems swallowing because of his low muscle tone. Early on he had to have his milk thickened, and he saw a speech therapist who specializes in feeding because of his difficulties. We had to hold him a certain way, give him a specific type of bottle, and most of this was learned by trial and error with her guidance. She led us through all of this, and eventually he outgrew the swallowing problems and we were able to stop thickening his milk. We continued to see the speech therapist, and she was there guiding me as I gave him his first bite of food on a spoon he already knew how to use because he had been taking medication daily for a while. She also instructed me along the way on advancing his diet, showing me things to do to help him chew his food properly, etc. Who knew eating could be so difficult? Now, he is actually eating pretty well. Because he had the problems early on, we had the speech therapist early on and because he has a thyroid problem, he used a spoon way earlier than he needed to for eating. Both of these things have helped us avoid bigger problems — food aversions, gagging, and even refusal to eat — commonly seen in children with Down syndrome.

So what is next on the agenda? Eating his first piece of birthday cake! 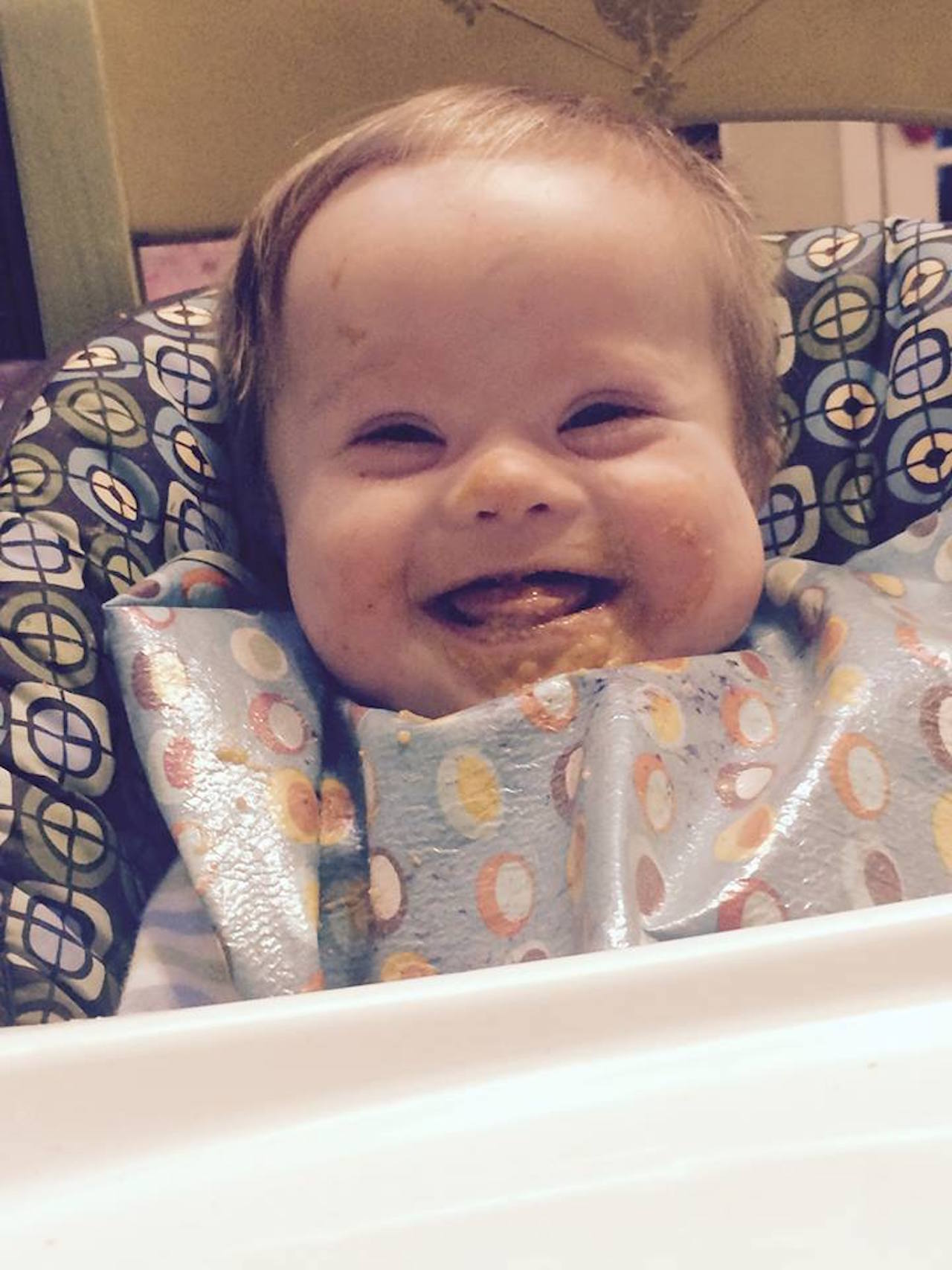