Note: Learning disability in UK is the same thing than intellectual disability elsewhere.

How will Scots with learning disabilities be voting in the referendum? 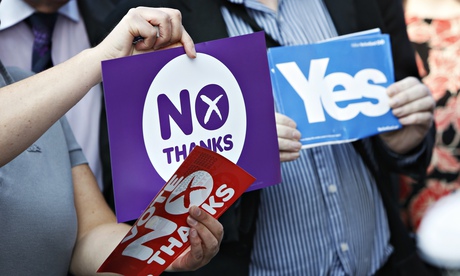 At the Learning Disability Alliance Scotland we have been determined that people with learning disabilities should have every chance to be involved in the country’s political debate.

We have run 52 workshops across Scotland with more than 700 people looking at issues surrounding independence and how to vote. We started from the basis that there should be no « understanding » test. Often people with learning disabilities are told by support staff, « you don’t really understand, and therefore you shouldn’t vote ». But if they like the look of a particular politician and want to trust them, why not?

But we also wanted to make sure people with learning disabilities could explore different ways of deciding on more complicated issues. Yet neither the yes nor the no camp published « easy read » information until late into the campaign. So some of our activist groups prepared their own.

Others went off to the Scottish parliament to interview Labour’s Jackie Baillie, who runs the cross-party group on learning disabilities, and the SNP’s Joan McAlpine, whose sister has Down’s syndrome. They made a short video outlining what difference the referendum would make for people with learning disabilities.

Those taking part found the workshops fun with lots of questions to think about. Who likes Flower of Scotland and who likes God Save the Queen? Who thinks that losing the pound is a good reason for voting no? Will the oil make us rich? Everyone gets a voting handset, just like in Who Wants to Be a Millionaire, and the answers come up on the screen. We knew we were on to a winner when someone told us: « You’re better than that lot on the telly. »

But this wasn’t information being delivered from above. The workshops were continually changed, depending on feedback from the people taking part. The participants told us what they wanted to know more about and then we went to Yes Scotland and Better Together to get the answers. A video was produced in which 20 people with learning disabilities give their opinion on the referendum, and it was used to help people decide.

But this is not just about the referendum, it is the latest stage in a process of increasingly engaging people with learning disabilities on mainstream issues. At the later workshops more people have been coming along wearing campaign T-shirts and badges.

And the results: 37 workshops went for yes, 10 for no and five were a dead heat. The total count was:

Thanks to @SCLDNews and @irissorg to have drawn my attention on this article.